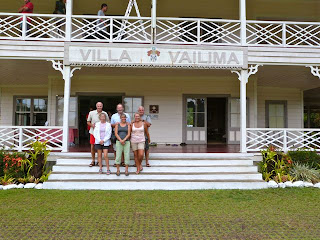 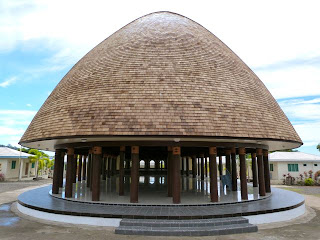 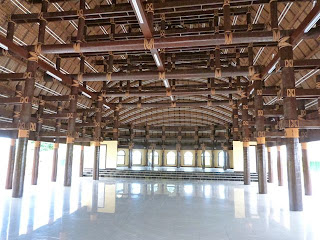 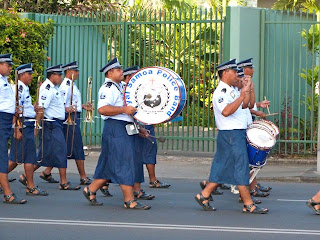 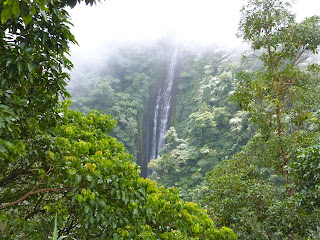 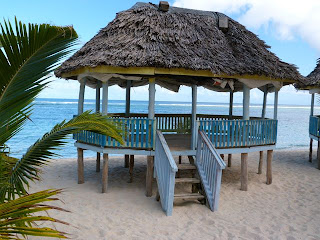 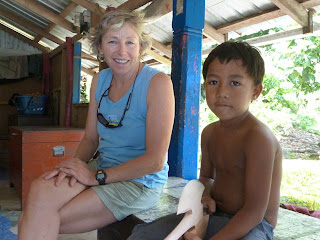 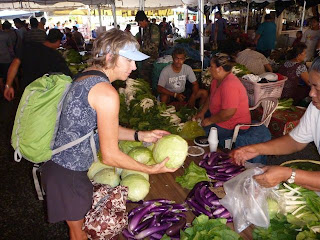 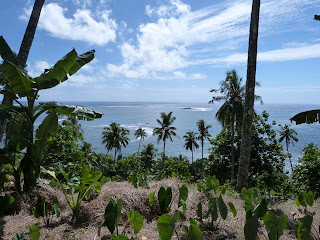 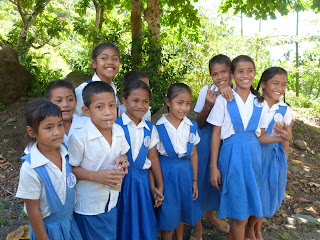 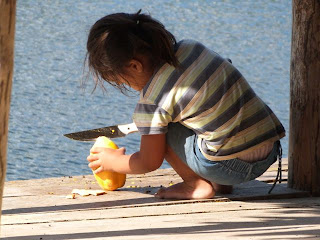 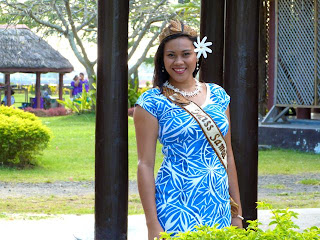 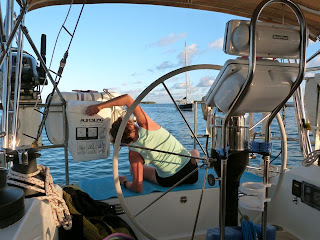 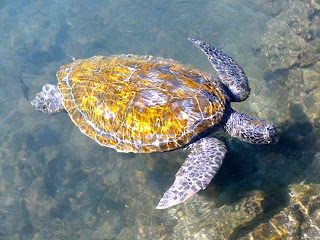 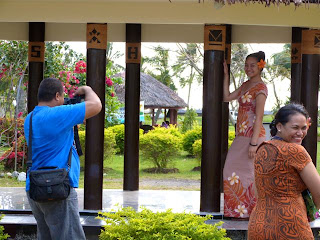 500 miles west-northwest of Suwarrow Atoll lies Western Samoa (now simply
known as Samoa).  It is an independent nation, originally colonized by
Germany and later governed by New Zealand.  It consists of two islands,
Upolu and Savai’i and is neighbored to the east by American Samoa, a US
territory.  A number of cruising yachts visit the town of Pago Pago in
American Samoa each year in order to make repairs or have parts shipped
cheaply from the US.  In the past, its harbor had a poor reputation due to
its industrial nature and ever-present, foul odor from 4 tuna canneries.
Because of American Samoa’s reputation, we neglected to include a visit to
the islands of Samoa in this season’s original itinery.   Fortunately for
us, our plans changed due to feedback from other cruisers and we found
ourselves headed toward another tropical paradise that will remain one of
our favorite places.

After a 3 1/2 day, downwind sail where we experienced a broad range of
wind speeds, we arrived off Samoa’s main port and city of Apia.  After
being cleared-in by the port controller, we proceed to a relatively new,
American-style marina, complete with floating docks, fresh water and
electrical power hook-ups (220V 50HZ).  As we motored slowly to an empty
slip, we were greeted by cruising friends Trevor and Joanne from the
British yacht “Malarkey” and John and Helen from the New Zealand yacht
“Awaroa”.  We had gotten to know them while in Bora Bora and Suwarrow and
we were anxious to share more adventures with them.  Since they had
arrived a few days earlier, they already knew their way around and had
arranged for a rental van that we’d all share for 2 days of island site-
seeing.

The next few days were a whirlwind of activity with visits to the island’s
many scenic locations and points of interest.  A first stop was at the
former home of author Robert Louis Stevenson who lived in a beautiful
mansion called Villa Vailima on the island for 4 years before his death.
A tour of the mansion proved fascinating as it gave a good look at both
the author’s life and that of colonial Samoa.

During our 2 days driving around the island, we marveled at the incredible
beauty and the simplicity in which most people lived.  Due to the pleasant
year-round climate, many homes consist of just wood or concrete floors
with roofs supported by poles.  In place of walls are tarps or curtains
that are typically left rolled up allowing the cooling breezes to flow
through.  A unique feature on nearly all homes is the presence of above-
ground crypts, some simple, some ornate, in the front yards.  It seems
that property in Samoa is rarely sold and simply passed along to family
members from generation to generation.  It is considered appropriate that
the land also be a resting place for those departed.  Another impressive
aspect of the Samoan society was the presence of an amazing number of
churches of various faiths that ranged from modest to grand in scale.  It
was sure a testimony as to the significance religion plays in the people’s
lives.

Aside from the sight-seeing, our island driving tour included swims in a
beautiful grotto accessed by a 100 foot, nearly-vertical ladder and
sliding down slippery, moss-covered rocks in a cascade that dropped into
several rain forest pools.

Evenings in Apia were spent sampling a few of the local eateries, watching
traditional dance presentations and socializing with other cruisers.
Another high-point of the visit was watching the morning flag raising
ceremony that beings at the city’s police station.  Uniformed officers
wearing traditional, black “lava lava” skirts and sandals would parade to
the main government building accompanied by a German-style, oompah band.
After the flag raising, they would proceed back to their station, through
temporarily blocked streets, all marching with precision to the beat of
the music.

After just 5 days in Apia, we set sail in the company of “Malarkey” and
“Awaroa” to Samoa’s island of Savai’i, third largest in the Pacific.  Our
schedule allowed just 3 days there anchored in lovely Matautu Bay on the
island’s north shore but we could easily have spent weeks absorbing the
slow pace and simplicity of the island lifestyle.  Alas, with many more
miles to sail and places to visit this season, coupled with the need to
take advantage of a favorable weather window, we reluctantly raised our
anchors and moved on.

Part of the fun of the cruising life style is to change plans on a whim
and go where your spirit takes you.  We feel so fortunate for having had
the opportunity to visit Samoa, see its beauty and interact with its
incredibly friendly people.  As we sailed away and watched its islands
sink below the horizon, we couldn’t help but feel richer for the
experience.
Posted by sv360blue at 4:26 PM 2 comments: 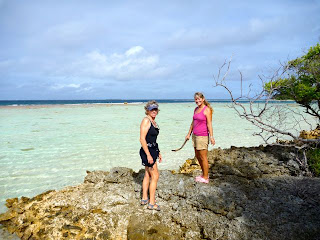 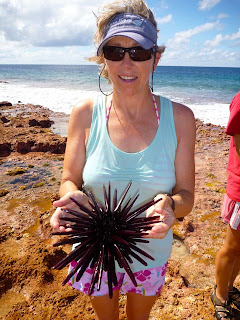 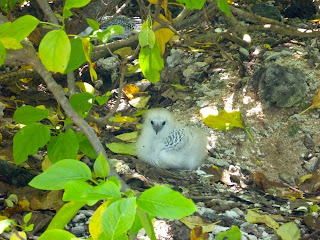 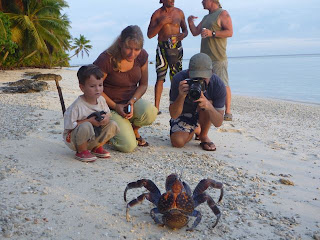 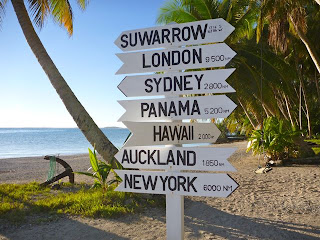 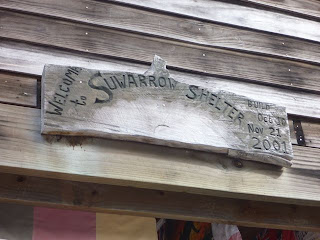 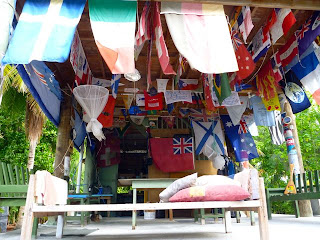 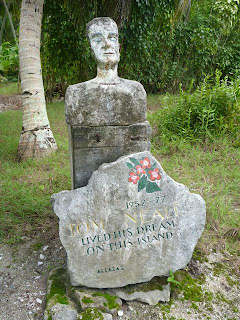 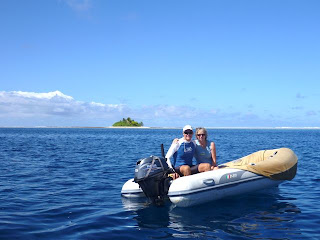 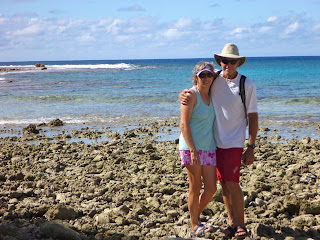 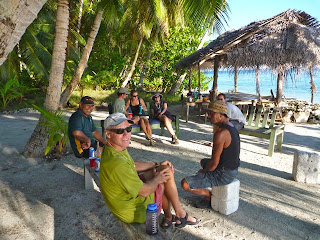 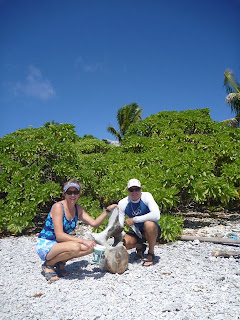 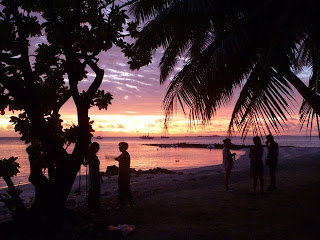 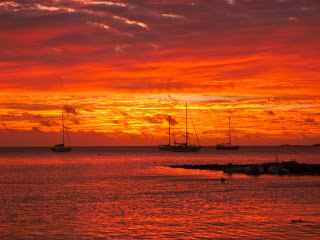 From Bora Bora, we headed Northwest on a 680 mile passage to the atoll of Suwarrow, a park in the Cook Islands. We were so excited to finally be sailing toward an island so special that one man, Tom Neale, lived there alone for nearly 16 years and later wrote a book titled “An Island to One’s Self.  3 days and 23 hours of downwind sailing, jibing several times across the rhumb line, positioned us off the reef pass leading into Suwarrow’s huge lagoon.  With the help of a few GPS waypoints, passed along by cruisers who had been there before, we safely entered the lagoon, steering clear of the shallow reefs between the entrance and the anchorage.  As we approached the anchorage, we spotted 2 boats that had preceded us from Bora Bora by a few hours and one that had been there for nearly a week.  We were immediately impressed by the incredible beauty of the area and the clearest water we’ve seen in the Pacific.  As we maneuvered “Blue Rodeo”, looking for a perfect spot to anchor, we could clearly see jagged coral formations scattered around the sandy bottom 60 feet below us.  Anchoring proved to be a bit of a challenge though due to the proximity of the other boats, depth of the water, numerous “bommies” (coral heads) and nearby, shallow reefs.  Eventually, we found a suitable spot and securely set “Blue Rodeo’s” anchor on a sandy bottom relatively free of coral.  When that was done, we tidied-up a bit and relaxed in our cockpit as the last of the afternoon light faded into a brilliant sunset.

The next morning, we were greeted by Harry and Anthony (“Ants”) who are rangers assigned this season to Suwarrow.  Even though Suwarrow is part of the Cook Islands, it is administered by New Zealand and rangers occupy a simple dwelling on the atoll’s Anchorage Island for six months each year.  They serve as both caretakers and officials proving customs and immigration services for visiting yachts.  Over the years, other resident rangers had earned a fine reputation for their hospitality and Harry and “Ants” were living-up to it in every way. They spent an enjoyable hour with us, in “Blue Rodeo’s” cockpit processing the official paperwork associated with clearing-in to a foreign country and chatting about the atoll and what it’s like to live in such a place for so many months, relatively isolated fro the outside world.  While the job of ranger in such an isolated place might be considered a punishment by some, they considered it a privilege.

Over the next few days, we would spend wonderful times with new and familiar cruising friends SCUBA diving, snorkeling, exploring, beach combing and sharing pot luck dinners ashore with the rangers. The scenery around us was a daily feast for our eyes and the pristine surroundings were just what we’d dreamed of when we fantasized about the South Pacific.  Paradise had been found!

While our vision of paradise included gentle, warm breezes and sunny skies, the reality is that the weather in this part of the Pacific can often be less than perfect.  While at Suwarrow, we experienced several days of high winds, and heavy rain.  The rain sometimes fell with such intensity that our dinghy would fill with 6 inches of water in less than an hour.  The island’s anchorage provides good protection from ocean swells but is open to significant fetch from the south through northwest.  During the squalls, when we experienced southerly winds, the surface of the lagoon’s water became as rough as we often see on the open ocean,  Despite the rough conditions, we continued to snorkel daily and take trips ashore where we visited with our friends in the protection of the dense palm forest and a cruiser’s shelter.  A daily highlight was the feeding of sharks on the east side of the small island.  We would follow the rangers to a beach there where they, for our entertainment, would dispose of food scraps by throwing them to sharks that swam by.  Within minutes, the water would be boiling with, Black Tip, White Tip and Grey sharks competing for the offerings.  While aboard our boats at anchor, we would also often be circled by numerous sharks seeking any tidbits that we might throw overboard or flush from our sink drains.  Though menacing in appearance, the sharks showed little interest in us and caused us little concern on our daily snorkeling excursions.

While snorkeling and SCUBA diving at the atoll’s numerous reefs, we were especially impressed by the otherworldly coral formations.  In some areas, jagged coral pinnacles rose from the depths nearly to the surface looking like stalagmites in a cave.  Due to the water clarity with visibility of 150 feet or more, it was possible to take-in an amazing panorama.  At times, while many feet below the surface, we felt like we were flying through air amidst a landscape resembling Utah’s Monument Valley.  While the coral formations never failed to amaze us, we were often surprised by the lack of large fish in the lagoon.  This led us, and our fellow divers, to speculate as to the reason.  Was it due to overfishing in the years before the atoll became a park?  Was it due to the large number of sharks?  Or, perhaps was is it related more to natural phenomena, like the full moon period we were in, that the big fish were there and chose to not be seen.  As we continued to dive daily, we were happy to see more and more fish in various places and began to feel that this special, undersea environment was fairly healthy and, that with continued protection, will remain one of the most pristine places on our planet.

Before we knew it, we had been at Suwarrow for 11 days and, even though we were enjoying it so much, we felt the irresistible pull of the exotic locations up ahead.  So, after bidding a warm farewell to the rangers and cruising friends who would stay a bit longer, we raised “Blue Rodeo’s” anchor an set sail for another island.  Though sorry to leave, we tingled with excitement knowing that new discoveries were ahead and that more adventures awaited us.
Posted by sv360blue at 2:22 PM 2 comments: