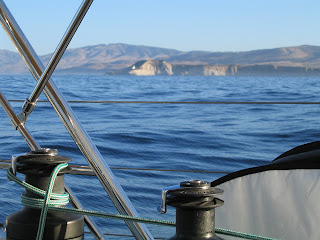 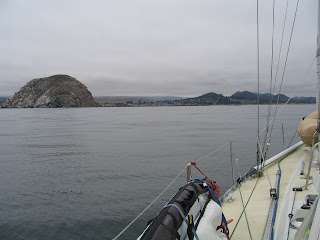 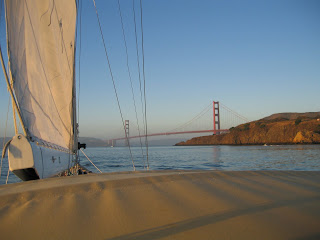 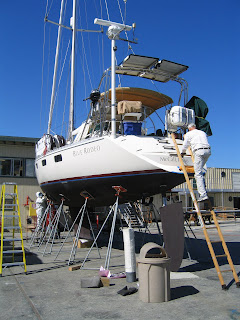 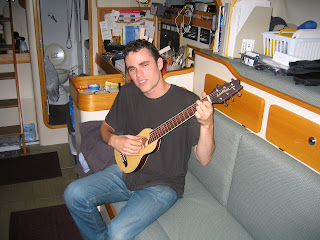 Our stay in Sausalito was special in many ways. After our able crew members, Steve and Carolyn returned home, Anne and I set to work fixing a few items on "Blue Rodeo" that were damaged as a result of the strong winds we encountered off the Oregon coast. We filled our days with chores, but took time in the evenings to see more of Sausalito, a movie and get together with Mark's nephew J.J. who is living in San Francisco. He joined us for dinner out and a visit to the boat. J.J. is an accomplished musician and song writer and treated us to a mini concert using Mark's new travel guitar. He amazed us both and left no doubt that the guitar has the capability of producing wonderful music if Mark ever finds time to practice.

Before Steve left, he and Mark attempted to stop a slow leak that had returned to the boat's lower rudder bearing. A day later, while motoring to the fuel dock to fill our tanks, Anne announced that the steering felt a little stiffer than normal. We decided to bite the bullet and haul "Blue Rodeo" out before continuing south and fix the leak once and for all. KKMI's new Sausalito boat yard proved to be the perfect place for the job as they have a clean, modern facility and a very knowledgeable staff. Boat yard visits are like going to the dentist...never fun but necessary. We worked on the boat for several days and by the end of the week were able to splash her back in the water. Being a bit tired from the boatyard ordeal, we decided to take it easy for two days before continuing south. As it happened, the annual Sausalito Art Festival was in progress that weekend and we made several trips to the venue to take in the art displays and listen to an open air concert with great entertainers like Pablo Cruise and Dave Mason. On Monday the 6th we eased our way out of the marina at sunrise in order to pass under the Golden Gate Bridge and into the open ocean near a slack tide. This meant navigating Sausalito's shallow waters at low tide which in several places showed just 4" of water under "Blue Rodeo's" keel. Once in the main channel we were treated to a breathtaking view of the Golden Gate Bridge and the shimmer of early morning light on San Francisco's famous skyline. Our next planned stop was the small central coast town of Morro Bay about 180 miles away. Our passage down the coast included our first overnight sail as a crew of 2. We took turns standing watch through the night and Anne spent more than her share of the time carefully scanning our radar and AIS displays looking for conflicting ship traffic while Mark napped. We sailed through dense fog for much of the night and at times, passed within 2 miles of 1000' long freighters without making visual contact. By noon the next day we approached the entrance to Morro Bay and were welcomed in by Mark's friend Eric who is now harbormaster there. He met us in the entrance with his motor launch and helped us pick our way through the harbor dredging operation. We spent 2 nights in Morrow Bay visiting Mark's old friend Scott, his girlfriend Jewel and Scott's brother Pete and his wife Marsha. Our short stay included a trip into San Luis Obispo for shopping and lunch and Anne announced that it was the kind of place that she could easily live. The town is cute as can be and Anne was envious of the long growing season that the residents were fortunate to have.

With one major geographical obstacle to pass, we focused our attention on a departure timed to round fearsome Point Conception in the early morning hours when wind and wave conditions are typically the most mild. With that in mind, we departed Morrow Bay at 9:30PM and had a pleasant overnight motor sail down the coast. The biggest challenge came after dark when we entered an area of fog and again had to rely on radar and AIS to steer clear of ship traffic. While Anne slept after a 2am to 4:30am watch, Mark steered "Blue Rodeo" around Point Conception shortly after sunrise on Friday the 10th of September. The fog gave way to clear, sunny skies and Mark felt a tremendous sense of relief at having returned to the Santa Barbara Channel and waters that he knew so well. After navigating through the challenging tides, currents, sea conditions and unfamiliar waters of the Pacific Northwest, Mark announced that, at least for a while, he could have a break from the intense concentration and focus.

Prior to entering Santa Barbara's harbor we contacted our friends Rob, Suzanne and Rich who were available to join us for dinner later that night. After tying up to a guest dock we were joined by new friends Hugh and Anne who were also sailing south to Mexico. We had met them in Morrow Bay and were happy to share information about our trips. Our evening in Santa Barbara flew by much too quickly and, after a walk the next morning, we left the dock and motor sailed in light winds 24 miles down the coast to Mark's old home port of Ventura. It felt like a homecoming as we entered the familiar harbor and secured a marina slip just a short distance from where Mark had kept his previous boats a few years ago. Within moments we had already bumped more old friends and took time to visit with them before giving "Blue Rodeo" a thorough bath. Mexico was beginning to seem so very close and, even though we had planned to return to Idaho for a short while, we were bristling with excitement over crossing the border and continuing south to the warm, tropical waters. Everyone along the coast had lamented the fact that this summer had been colder and foggier than normal and Anne remains skeptical that we will ever reach the warm weather. I'm sure there will be a time in the coming months, while suffering in the hot tropical sun, that we will wish we could have brought some of the cool air along with us.

It's now off to Idaho where we will attend to chores around our house and make plans to deal with our mail and bills in the coming months. When we return to "Blue Rodeo", we will continue to make a few upgrades to her systems and cruise through the Channel Islands and Catalina as we head toward San Diego.
Posted by sv360blue at 6:51 PM No comments: