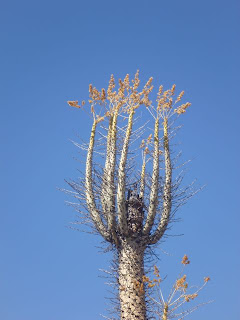 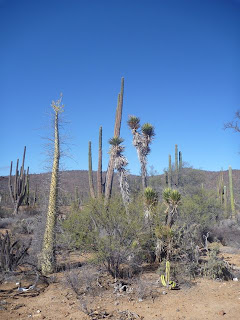 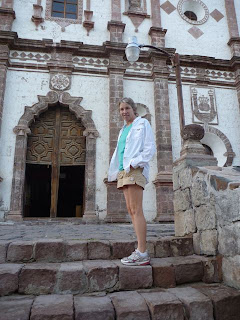 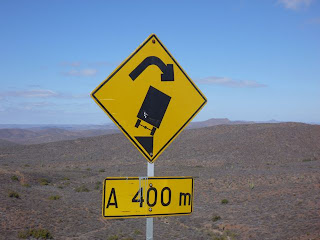 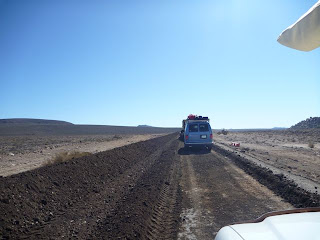 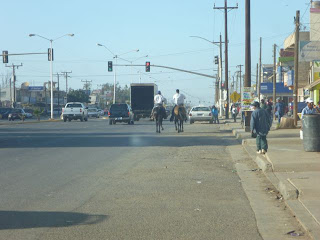 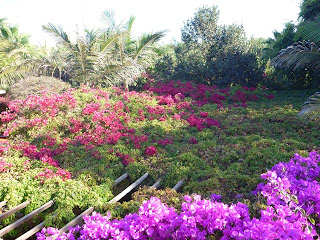 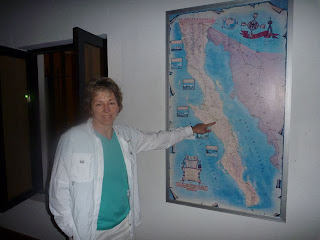 Season three of the “Blue Rodeo” adventure started off in a way neither of us planned. In preparation for our winter cruising in Mexico and next spring’s South Pacific crossing, we purchased a gasoline powered scuba compressor and a 14’ long, carbon fiber whisker pole. With “Blue Rodeo” already in La Paz, near the southern end of the Baja Peninsula, getting these two large items to the boat presented a challenge. The use of a truck transport company was a possibility but we had heard horror stories about items being held-up in customs for weeks and excessive importation duties being charged. Due to size and hazardous material limitations, flying the items down on an airline flight was also ruled-out. Ultimately, we decided to make the 4800 mile roundtrip drive from McCall, Idaho to La Paz and back and personally insure that the items arrived safely. Once the decision to drive was made, it also gave us the flexibility to load-up on some of our favorite foods from Trader Joes and huge cases of US quality paper towels from Costco. The trip proved to be a splendid adventure. We left McCall on the morning of the October 12th, driving Highway 95 most of the way to our first overnight stop in Fallon, Nevada. The next day we continued to Chatsworth, California where we spent two nights with Mark’s family. From there, it was on to Oceanside after first going to San Diego for last minute shopping at the many boat stores there. We spent both that night and the next with sailing friends Cathy and Lee from the J-130 “Sirocco. Prior to continuing south, we shared a wonderful evening of friendship and excellent food with Lee, Cathy, Dave and Marisa from “Pacifico” and Mike and friend Michelle from “So-Inclined”. The next morning, we left before the sun was up to meet with three other sailing friends from Mark’s days in Ventura, California, with whom we’d caravan down to La Paz. Jeff and Anne from “Outrider” and Ken from “Bungee”, many-time veterans of the Baja drive, were also driving back to their boats and we were happy to have the opportunity to tag along and learn from their experience. After rendezvousing with them, we headed for our border crossing point, the small town of Tecate, about 30 miles east of San Diego.

Having secured a Mexican temporary import permit for “Blue Rodeo”, we should be allowed to bring boat related parts and accessories into that country without paying duty. But, since the rules are often interpreted differently by various officials, our biggest concern upon reaching the border was that our overloaded car would be thoroughly searched and we would have to pay duty on the items we were bringing in. This could potentially amount to a tax of many hundreds of dollars and so we were greatly relieved when the customs inspector, on the Mexican side of the border, allowed us to pass through even though we were given a random, red light to stop. We breathed a huge sigh of relief and felt like we had dodged a bullet. After a fairly brief and straight-forward stop in Ensenada for our tourist visas, we continued on the four-hour drive to the town of San Quintin enjoying the unique scenery along the way. For the most part, the road conditions were very good but there were a couple of places that roadwork was being done and we found ourselves having to leave the pavement, bouncing along through the desert dirt and sand like we were participants in the Baja 1000 off-road race. We stopped for the night at a cute little hotel just off the main highway where we paid just $35.00 for our comfortable room. We were all tired and the hotel’s restaurant was closed so, after checking -in, we volunteered to drive back into town and pick up some chicken “al carbon” (grilled) with tortillas and salad and bring it back for everyone’s dinner. What a feast!

The next morning dawned cool and crisp as we climbed into our vehicles for a full day of driving. Our goal was to reach the town of San Ignacio where we had reservations at the Desert Inn. The drive, although quite long, proved to be breathtaking. It was amazing how much the landscapes changed along the way. Each valley and range of hills had its own unique topography, vegetation and lighting. We were particularly impressed with an area named Catavina with its boulder-strewn landscape and beautiful cacti. In Catavina, the soil is scarce and the landscape is littered with rounded rocks varying from marble-size to bigger than a house. The boulders are shaped by blowing sand that gives them a smooth, rounded appearance. Nestled in and amongst the boulders are hundreds of species of cactus, many found nowhere else in the world. The largest, the Cardon, is the world’s largest and often mistaken for the Saguaro found in the U.S. desert southwest. The Cardon can grow to 70 feet tall and weigh up to 25 tons while storing up to 1 ton of water at any given time. They can live as long as 300 years and are very slow growing. Another unusual cactus, found only in the Sonoran Desert is the Elephant cactus of which there are two types. The Boojum, which look like upside-down carrots and can live up to 500 years, dividing in two after 100 years and the Cirio, similar to the Boojum but living only 20-30 years. On our way home, we took time to stop and take lots of pictures of this colorful region. We found the small towns and settlements along the way also fascinating. It is hard to imagine that people live year-round in such an inhospitable climate. During the drive, we encountered another rather long area of roadwork and had to drive along the side of the road for several miles, once again, bouncing over large chunks of gravel and occasionally feeling our car transition into 4 wheel drive when hitting a particularly soft patch of sand. All in all, the driving took lots of concentration but was quite entertaining. After what seemed like forever, we arrived in San Ignacio, a small town famous for whale watching tours in the nearby lagoon. On the way back, we would spend another night there and walk from our hotel into the tiny town where we enjoyed an evening having dinner and an ice cream while watching boys and young men playing volley ball in the town square with a soccer ball. They turned out to be surprisingly good players. While in town, we also walked through, and photographed, the impressive cathedral that dated back to the 1700s.

Day 3 ended up being the longest drive of all because we elected to continue on to La Paz rather than spend an overnight in Loreto. After departing San Ignacio, we followed the highway as it climbed over a tall and rugged mountain range and descended to the Sea of Cortez side of the peninsula offering spectacular views of the beautiful areas we explored by boat in the spring and early summer. We stopped for a late breakfast at “Bertha’s” Cafe in Bahia Concepcion’s El Burro cove where we had eaten several times while anchored in the bay. We also hoped that we might see Lynn and Howard of “Swift Current” who had e-mailed us the night before that they would be arriving there late that morning by boat. Alas, our rendezvous didn’t happen then but did in Loreto a week later on our way northbound, when we had lunch with them and excitedly shared plans for the cruising season. After breakfast at Bertha’s, we once again continued south and found ourselves enthusiastically exclaiming about the majestic scenery, especially with the Sea of Cortez views. Since there had been recent rain from summer thunderstorms, the landscape was, in places, more lush than most areas we had traveled through. The terrain along this section was quite rugged, bordered by the Sierra Gigante Mountains to the west. Along this stretch, the driving became more of a challenge as the road was often quite narrow and without any shoulders or guard rails. Passing the occasional semi truck was rather harrowing and its easy to see how a small lapse in concentration of either party could result in tragedy. One of the things that got our attention was the number of the roadside memorials to loved ones that had perished along the way. They varied from primitive crosses with flowers to masonry houses and marble plaques. We wanted to photograph a few of them but to do so would be to risky as they were often in the most dangerous places along the roadside and nearly impossible to get to. One thing we forgot to mention was the military checkpoints along the highway, five in all, from just south of the border to just outside of La Paz. At the checkpoints, the road was barricaded so vehicles had to stop and submit to inspections for weapons and drugs by the Mexican Army. The check points were manned by young men, toting automatic rifles and sidearms. We would later learn that they were often not provided with ammunition. They lived in encampments along the side of the road that were poorly equipped and primitive at best. Apparently, Mexico requires its young men to serve for a year in the military to earn full citizenship and be eligible to procure a passport to travel outside of the country. At the checkpoints, one may or may not be searched depending on how you are perceived (profiling). We submitted to cursory searches each time, as did the travelers in front of us. Typically, this entailed searching the glove compartment, floor mats and the occasional bag.

The final leg of the day transited a broad agricultural basin with the dusty cities of Insurgentes and Constitution before climbing over another range of hills and descending
toward La Paz. The last narrow and twisting stretch was made all the more interesting by a semi truck speeding along in front of us while shedding chunks of tire from a retread that was coming off. By the end of the day, we arrived at Marina Palmira where “Blue Rodeo” waited peacefully. We are so happy to be back at the boat but we couldn’t relax yet as the whole car and our precious cargo had to be unloaded. After numerous trips with a dock cart, everything was unloaded and we breathed a happy, if overheated sigh of relief.

We would spend the next five days toiling in the heat and humidity, stowing gear and working on projects before “saddling-up” for the drive back to the States. We were anxious to take the car home and button-up our house so that we could return to the boat and feel like “real cruisers” once again.
Posted by sv360blue at 8:10 PM 1 comment: