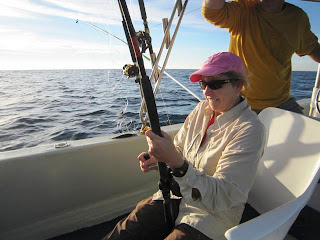 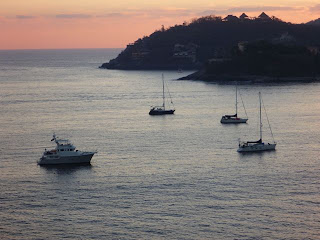 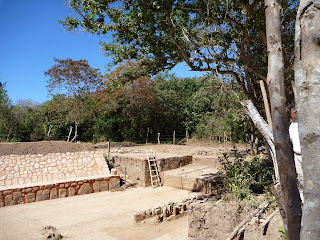 After spending a few days in the various anchorages around Manzanillo, we headed south once again in order to reach Zihuatanejo in time to rendezvous with our good friends Henry and Janice from the Nordhaven 55 “Cloudy Bay”. They would soon be leaving there for Panama and we welcomed the opportunity to spend some time with them before they departed. We were also excited about reaching Zihuatanejo so we could participate in the annual Sailfest, a week-long, sailing oriented fundraiser put on by cruisers to raise money to build schools for the local indigenous children.

Like most sailors, we planned our departure so as to arrive during daylight hours at our destination. This required a 4am departure from the anchorage at Las Hadas and about 33 hours of sailing to reach Zihuatanejo. After raising our anchor, we carefully wound our way through other anchored boats and, upon reaching the open water of the bay, raised our main sail and began motor sailing down the coast. After a short while, the usual morning winds began to blow from the shore and we unfurled our jib, shutdown our diesel engine and began swiftly gliding ahead under sail alone. Soon, we were greeted by the beautiful orange and red hues of another sunrise and, before long, we were basking in the warmth of a new day. We continued ahead with good sailing conditions throughout the day but were forced to restart our engine and motor sail for a few hours during the middle of the next night. Our average speed enroute remained near our estimate and we reached Zihautanejo by early afternoon the following day. As we approached, we made radio contact with Henry from “Cloudy Bay” and he sped out to meet us in his high powered inflatable tender. We all smiled from ear to ear and exchanged the warmest greetings as he accompanied us into the bay where we dropped our anchor. Zihautanejo Bay offers incredible views in every direction from both water and shore. The rocky hillsides around the bay feature amazing private homes, beautiful hotels and restaurants in addition to the simple and modest structures that date back to the town’s pre-tourism days as a small fishing village. Having visited cruising friends there 3 years ago, we felt so fortunate to now be returning on our own boat and living the dream that they had been. That evening, we had dinner aboard “Cloudy Bay” and were introduced to Henry and Janice’s friends who were visiting from California. Weary from our overnight passage, we settled into bed early that night and were quickly rocked asleep by the gentle swells that entered the bay. The next day, Henry, Janice and their friends Stan and Diane invited us to join them on an inland excursion to the site of an ancient pyramid. After an amusing round of negotiations with various the drivers of rental vans, our group of six split into two cabs and set out toward the archeological site. Leaving the waterfront area, we were quickly reminded of how Zihuatanejo has grown over the years and how little of the town can be seen from the water. Despite it’s growth, it remains absolutely charming and appears especially neat and clean with recently repaved streets and sidewalks and new shade awnings extending from the fronts of most buildings.

After about 45 minutes of driving, we departed the main highway and followed a dirt road through coconut palm plantations toward a tiny village. Our cab drivers admitted that they had never been to the site but, after stopping several times to ask directions, we found the gate that lead toward the partially excavated pyramid. Sadly, the gate was locked and as we learned later, it is rarely open to the public as researchers are just beginning to uncover it’s remains. After asking directions from another local, we were directed to a humble home in the village where a young man emerged offering more information about the site and to show us some artifacts that his grandfather had found there many years prior. He walked with us to a tiny and simple stone church a short distance away where a 4 foot tall stone artifact, said to be thousands of years old, stood on display. After examining the artifact and the quaint, little church, we returned to the gentleman’s home and were invited inside. As we entered his very modest home with uneven concrete floors and little furniture, we were introduced to his aged parents. Despite not being able to communicate with them in english, they greeted us with sincere, warm smiles. We remained skeptical about what we were about to be shown, expecting to see the usual, touristy trinkets patterned after the ancient style. We were stunned however when he brought out several black plastic trash bags containing broken bits of ancient, authentic artifacts. The carved bits of stone and two substantial busts were absolutely fascinating, as was the story the story he told about his great grandfather recovering them from the site. We realized we were among a privileged few that were able to hold and examine these potentially priceless items. He told us that the University of Mexico City had begun excavating the ruins and restoring a portion of it. A modern archeology research center had been built nearby and pressure was being put on the town’s people to sell their land and move away so the entire site could be fully examined. It was easy for us to understand that the emotional attachment to the their homes and land was far more important than the money being offered by the government. It will be interesting to see how the conflict will be resolved in the future. After thanking the gentlemen for his time and offering a small gratuity for his service, we climbed back into our taxis and headed toward our next stop, the town of Petatlan, where we had been told was a spectacular church worth seeing. As we left the small village, we stopped adjacent an ancient sports court where a basketball-like game was played by the indian civilization that lived in the area. It was a sunken pit with a gravel floor and stone seating around the perimeter. Memories of our junior high school history lessons reminded us that the games played there often resulted in the beheading of the losing team’s players.

After visiting the church at Petatlan, we returned to Zihautanejo where our group had an delicious evening meal ashore at an Italian restaurant overlooking the bay and our anchored boats. The next day, Henry, Stan and Anne arranged a morning fishing trip aboard a panga owned by a local restaurant owner. He proved to be quite an expert fishing guide and, soon after their 7 am departure, Anne fought and successfully landed a 90 pound sailfish. Anne would have preferred to release the beautiful fish but it was likely to be the only catch of the day and the Roberto, the boat owner, expressed the desire to keep it for his restaurant. To the group’s surprise, their luck would continue and soon, Stan was landing an bigger sailfish followed by Henry’s catching an even bigger marlin. In the end, three highly sought-after billfish were caught within four hours and one sailfish and one marlin were destined to become fish taco’s at Roberto’s restaurant. The three intrepid fisherman returned to our boats bubbling with the excitement of what is often a fisherman’s lifelong dream. In just four hours, the three had caught fish that elude most fisherman and bring people to these waters from all over the world.

The next day we had the opportunity to register our participation with the group organizing the Sailfest. We offered to man the sign up desk one afternoon during the week and to take paying guests aboard “Blue Rodeo” for the festival’s sailboat race and parade. The next few days in the bay were busy with boat chores and a social schedule that left us somewhat exhausted each night. Every day, more familiar boats entered the bay and dropped their anchors nearby. Reunions with our many friends followed and our evenings were usually spent ashore sightseeing and seeking out interesting places for dinner with our sometimes large group. With the start of Sailfest activities just a day or two away, we also looked forward to the arrival our friend Carol and her friend Amy who were coming down from Seattle to participate and get a break from the cold, wet northwest weather.

Each night, we would return to “Blue Rodeo” and sit in the boat’s cockpit bathed in the warm tropical breezes surrounded by twinkling starlight and the town’s lights ashore. It’s hard to imagine a more beautiful and peaceful place to spend time.
Posted by sv360blue at 8:37 PM 1 comment: