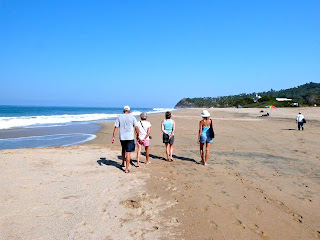 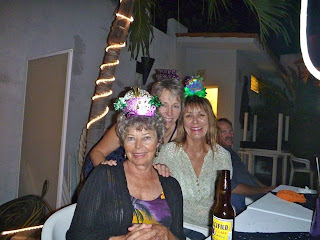 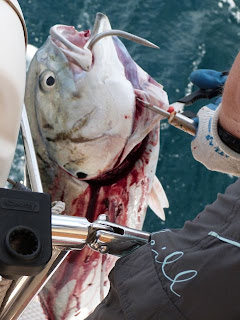 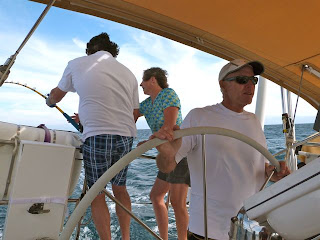 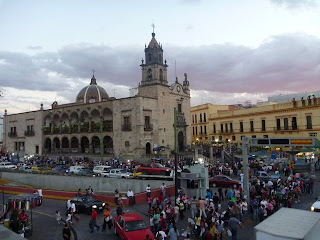 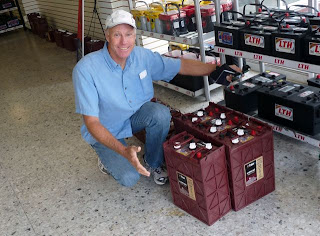 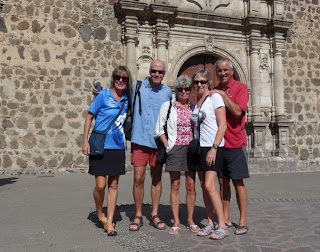 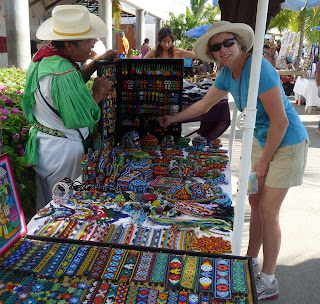 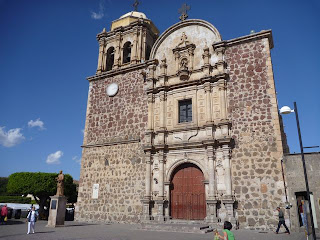 Our time anchored at Punta de Mita was really special this year. From time spent there last season, we knew our way around the town and what was available. The day after our arrival, we dinghied to the beach and took the short walk into town to replenish our supply of fresh fruit and vegetables. While walking from a pickup truck mobile produce stand, we talked about how we needed to get in touch with Karen, a friend from last year, who lives in nearby La Cruz. Suddenly, in one of those strange coincidences that make you go… “hmmm”, we heard a car honk its horn and lo and behold if it wasn’t Karen behind the wheel. She said she was there to do some stand-up paddle surfing with friends. After exchanging hugs, we all decided to go for drinks at a beachside palapa restaurant where we met several more of her friends from the area. It was such a fun afternoon. The next two days were spent stand-up paddle surfing and Anne, on her first day, caught two good waves, riding them all the way to the beach. Quite an accomplishment for her first day of surfing! She later exclaimed that she is now hooked! Back aboard “Blue Rodeo”, we enjoyed relaxing evenings and beautiful sunsets. Looking forward to a few more days there, we were disappointed one morning to discover the batteries that provide power to all of our household systems were not performing as usual. Mark did some checking and found we had a bad cell in one of the batteries affecting the ability of the others to hold a proper charge. This was not good news and we knew we had better head into the marina in La Cruz right away to check it out.

Although we were disappointed to leave Punta de Mita earlier than planned, we were happy to arrive in La Cruz as it is one of our favorite places on the mainland. The marina is very cruiser friendly and the little town is full of surprises. It is known for having great music from such locals as Brian Savage and Philo Hayward and an assortment of wonderful dining experiences with an eclectic mix of restaurants. On Sundays there is a large outdoor market just outside of the marina. Anne loves to go exploring there and usually returns to our boat with all kinds of goodies ranging from chocolate tamales to jewelry. After settling into a marina slip and checking in with the office, we couldn’t wait to explore the town and see what had changed since last year. After reacquainting ourselves once again, Mark got down to the serious business of determining exactly what was going on with those darn batteries. After exchanging emails and speaking to good friend Steve, it was decided new batteries were in order. Steve referred us to a distributor in Guadalajara where we might find the specific, somewhat unusual model of batteries we needed. Mark immediately emailed them and received a timely reply in broken English reporting that they did indeed have them in stock. Our friend Karen, who is fluent in Spanish, helped confirm by telephone that the batteries were available in as little as two day’s time. The next step was to arrange for transportation. Mark remembered a Brit named Mathew who had a van service and enlisted his services for the drive to Guadalajara and back. We invited Karen and sailing friends Lynn and Howard to join us and departed the next Monday morning. Mathew has taken many tourists to Guadalajara and was the perfect tour guide. We traveled in a very comfortable, new Toyota, 10 passenger van. He had the trip planned to drive the coastal route on the way over, via the quaint distillery town of Tequila. We stopped there and had a leisurely lunch and a walk about. After piling back in the van, we drove the rest of the way to Guadalajara where Mathew’s wife’s family owns a small hotel in the university district of the city. Upon arrival, we checked-in and headed out for an evening of exploring. With Christmas just days away, the city was bustling with energy. Shoppers and revelers were everywhere as were lots of street vendors and performers. We visited the huge municipal market that extended for several blocks and was 3 stories high. Every square inch was packed with merchandise varying from flowers, both fresh and artificial, to produce and merchandise. It had everything you could imagine for sale. One whole floor was devoted to electronics. We meandered through the tightly packed lower floor, feeling a bit claustrophobic, and managed to find Mark’s four year old niece a traditional dress, in the color of the Mexican flag, for Christmas. As we continued to stroll about the town, we enjoyed all the wonderful decorations hung above the streets. An interesting thing we noted was all the shops with clothing for christenings, girl’s coming-of-age parties, weddings and formal balls. We had never seen anything like it. The “people watching” was fabulous and we ended up taking loads of pictures. Karen took us to a great little dinner spot written up in the Lonely Planet travel guide which we really enjoyed. Afterwards, we walked back to the hotel and settled in for the night.

The next morning the boys drove off to find the batteries while the girls went in search of coffee. Upon meeting up, we were happy to learn that the batteries were indeed in stock and we now had them in our hot little hands. What a relief! With that weight off of our minds, we then departed for the nearby market town of Tlaquepaque. We walked around the town, which is famous for artwork, crafts and furniture, and saw amazing works from the local artisans.

After lunch, it was back on the highway driving through beautiful agricultural areas as we followed the two lane road as it climbed into the jungle-covered mountains. Our return route to Puerto Vallarta would take us through several small and historic towns. The last several hours were spent negotiating the narrow and winding road after dark. Boy, were we glad someone else was doing the driving. By 8:30pm we were back at the marina unloading our four, shinny, new batteries weighing 128 pounds each. By early the next morning, the batteries were installed in “Blue Rodeo” and happily supplying power to our electrical system. The excursion to obtain them had been an enjoyable adventure and the time elapsed from when we determined that we needed new batteries until when they were installed was just six days. We would later learn that others had been waiting for over six weeks for locally ordered batteries to arrive from the States. I guess we’ll continue to count our “lucky stars”.